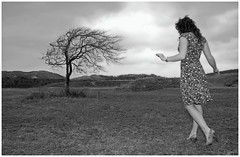 They walked and came to a place where grew a tamarisk tree, and about the tamarisk entwined a vine holding many bunches of grapes.

The old maidservant said, “Behold this tree, of what value would it be were it not for the vine? Would it have any value except as firewood? And what of the tree to which it clings, would it not straggle along the ground, laying in the dust to be crushed underfoot by any passer-by? It would be a helpless thing unable to raise itself up, a barren creeper bearing no fruit.”

“So see what benefit comes from their union and learn wisdom.”

“Is not the tree named as a man is named and the vine as a woman is named?”

“We who are old see lessons in such things and in learning from them gain wisdom. The young are loath to even read to their benefit from the book which is always open before their eyes.”

This site uses Akismet to reduce spam. Learn how your comment data is processed.